Nicknamed the ghost cat, the eastern cougar once roamed the Adirondack Park and Northeastern United States centuries ago. Extirpation of this creature due to hunting and deforestation led to a rapid decline in the population, and now, despite rare sightings around the region, the U.S. Fish and Wildlife Service has declared it officially extinct. 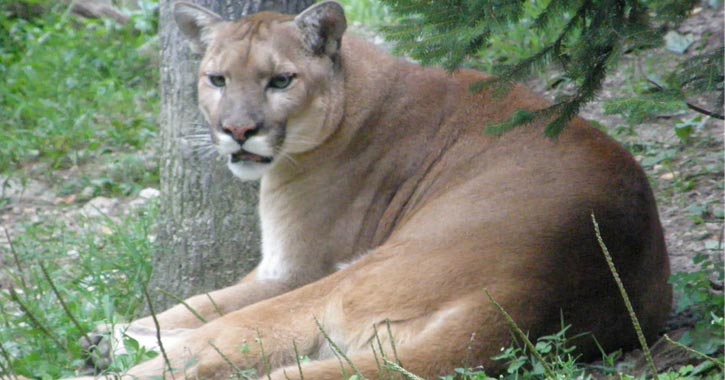 About the Eastern Cougar

When European settlers began to travel throughout the Northeastern U.S. back in the 1500s, they were initially unaware of the presence of eastern cougars. After encountering the predatory cat, settlers viewed them as a danger to themselves and their livestock. This kicked off a period of eastern cougar hunting that would bring the area’s population to near extinction.

Due to this rapid decline, the eastern cougar was placed on the list of endangered species in 1973.

Eastern Cougars in the Adirondacks

From the mid-1900s through the early 21st century, cougar sightings in the Adirondacks were rare. Most reports were isolated instances and offered little evidence of a strong eastern cougar population. As such, the eastern cougar was eventually recognized as extinct in New York State.

In January 2018, after years of research into the status of eastern cougars in the Northeastern U.S., the U.S. Fish and Wildlife Service declared the subspecies extinct and removed it from the list of endangered species.

According to the official report, the department found “no evidence of the existence of either an extant reproducing population or any individuals of the eastern puma subspecies” and “it also is highly unlikely that an eastern puma population could remain undetected since the last confirmed sighting in 1938.”

What Does This Mean For the Future of the Eastern Cougar?

This decision reinforces the belief that there is no sustainable eastern cougar population, and that most if not all sightings are a case of mistaken identity or of a non-native cougar.

However, an article by the Yale Environment 360 notes that their removal from the endangered species list “clears the way for eastern states to rebuild cougar populations” in regions like the Adirondacks.

Some studies have shown that the reintroduction of eastern cougars could help maintain deer populations, but there are cons to consider as well.

In any case, the potential reintroduction of eastern cougars would require years of research and discussion before such a major decision could be made.

Learn more about the history of eastern cougars in the Adirondacks >>