Last week in his 2018 State of the State, New York Gov. Andrew Cuomo announced that the state would file a petition with the Federal Surface Transportation Board to stop Saratoga & North Creek Railway’s (SNCR) tanker car storage plan in the Adirondack Park. In response, Union Tank Car Company, the owner of roughly 65 tanker cars that had already been stored as part of the plan, has stated they will remove and relocate their cars outside of New York State. 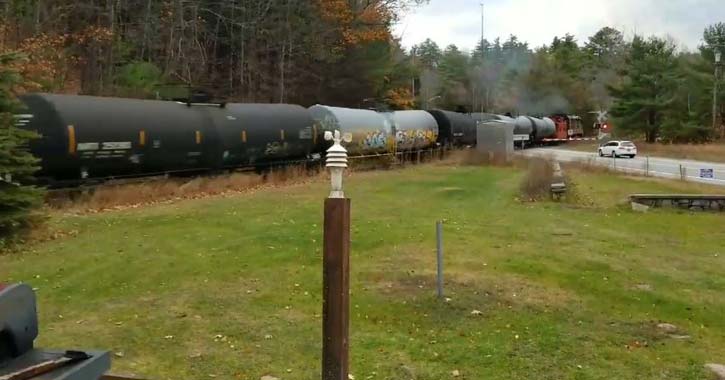 A few months ago in September, Iowa Pacific Holdings, the parent company of SNCR, revealed their plan to store old tanker cars from other companies on rail line that they own in the Adirondacks. The revenue from the tanker car storage would then help SNCR pay for rail improvements and services.

After the initial announcement, there were multiple concerns from environmental groups, local officials, and even state departments. While SNCR noted that the tanker cars would be clean, there were still lingering questions about the potential environmental impacts of storing 2,000 of them in the Adirondack wilderness.

By December, roughly 65 tanker cars had been stored by SNCR along the Sanford Lake Rail Line in Minerva.

In Gov. Cuomo’s recently announced 2018 State of the State, the 8th proposal focused on the state’s commitment to stopping the tanker car storage plan. Soon after, the NY State Department of Environmental Conservation filed a petition for waivers and exemptions with the Federal Surface Transportation Board in an effort to remove the cars from the rail line.

The state department also sent a cease and desist letter to Iowa Pacific Holdings, demanding the company remove the cars already in storage until a decision is made.

Removal of the Tank Cars

According to an article by the Post-Star, the Union Tank Car Company will comply with New York State’s demands and remove their tanker cars from storage. The removal process is expected to run through mid-January 2018.

William Constantino, the general manager for leasing for the Union Tank Car Company, told the Sun Community News, “We regret the railroad’s decision to place some of our rail cars in the Adirondack Park, which raised public concern about their effect on the park’s beauty and environment.”

Although the tanker cars owned by Union Tank Car Company will be relocated outside of New York State, Iowa Pacific Holdings plans to continue storing cars over the next few months. The rail company has other clients with tanker cars that may take the place of the ones that will be removed.

In addition, as they’ve stated since the start of the plan, Iowa Pacific Holdings will stop storing cars only if New York State purchases the freight easement on the rail line from them.

Until then, we may see more tanker cars arrive in the Adirondacks for storage in the near future.