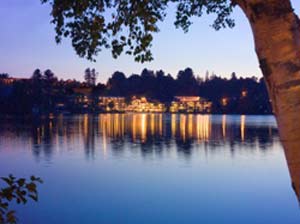 How does one go about naming a new bar and restaurant at one of Lake Placid's beautiful lakeside resorts?

The help of the public who knows the resort best, of course.

Last December, the owners of the Golden Arrow Lakeside Resort at 2559 Main Street asked the public for its assistance in coming up with fitting monikers for its newly added restaurant and bar. Over two hundred submissions later, the official names have been chosen. Jennifer Holderied, one of the resort's owners, said of the naming process, "The response to the naming contest for the restaurant and bar was much greater than we had anticipated. The evaluation process was harder than we had imagined, as so many great names were submitted. We wanted to make sure that the chosen name bears some significance for the resort and will stand the test of time."

The bar's new name, Straight Shot, was submitted by Tyler Jones and Rachel Hines from Chapel Hill, NC. The bar has a wide selection of wine and spirits, and makes cocktails both classic and custom with expert finesse.

As for the restaurant, Lake Placid resident Chris Ericson came up with the winning name: Generations.The entrepreneur, whose locally brewed Ubu™ Ale is the key ingredient in the restaurant's highly popular Ubu™ Fondue, suggested the name because the resort's owners, the Holderied family, consists of three generations that all work together. Not to mention, the resort is known for being family-friendly; several generations of families visit there together every year.

Generations serves breakfast, lunch, and dinner. The dining room features luxurious and welcoming decorations like wood accents, a bamboo floor, stone fireplace, and warm colors; the walls are adorned with photography and artwork, all from local artists. The menu, created by the management team, general manager Mark Corr, and executive chef David Hunt, has a diverse selection for each meal; the price range is well-balanced. The team created the menu in the hopes of appealing to every age group as well as the year-round international visitors to the resort and Lake Placid. Holderied added, "Our goal for the menu is to keep it as local and fresh as possible. Living in the region we do, there are extensive offerings in each season that allow us the ability to showcase the many wonderful farms and products that are grown, raised and cultivated in New York's Adirondack region. As a resort we work hard every day to operate as sustainably as possible. Doing the same thing at the restaurant is just a natural extension of that. We were lucky to find a management team that is as passionate about it as we are."

The restaurant's well-balanced wine list offers a variety of both international and domestic wines, many of which are sustainable and organic. The resort has a philosophy of sustainability, and in addition to the wine offerings, the menu offers selections made from foods raised and grown locally. In order to function even more successfully as a sustainable restaurant, Generations is being evaluated by the Green Restaurant Association.

During the summer, the outside deck of the restaurant shows off views of the High Peaks, Mirror Lake, and Whiteface Mountain and also showcases the resort's Green Roof, which provides fresh herbs and spices for Generations and reinforces the resort's ecologically friendly philosophies.

Back in 2005, the Golden Arrow began a Green Initiative and has since excelled at creating and following environmentally friendly programs and practices. The resort is a leader both statewide and nationally, setting high standards for the lodging industry to aspire to. In 2008, the NYS Department of Energy and Conservation gave the resort its Environmental Excellence Award; it is the only hotel property to have ever received the honor. 2009 brought the resort the NYS Hospitality and Tourism Association's Good Earthkeeping Award. In addition to these honors, the Golden Arrow is the US's first and only one resort to have attained International Audubon's four Green Leaf rating; the staff has been working conscientiously and hopes to achieve a five Green Leaf rating - the IA's highest - as soon as they can.

The Golden Arrow Lakeside Resort is located directly on the lake at 2559 Main Street in Lake Placid, New York. It has are 166 rooms and suites, extensive conference facilities, dining, and a wide range of amenities on property. For more information or reservations, call 518-523-3353, 800-582-5540.